Ecovillages as Hubs for Social and Ecological Regeneration

As the network of Ecosystem Restoration Camps is growing, we are connecting to many other people aligned with the mission of regeneration. There are regenerative communities worldwide which have been playing a crucial role in ecosystem restoration for many years. These communities  are restoring local soils, water cycles, and entire biomes such as forests. Many of them are part of the Global Ecovillage Network (GEN).

With similar missions GEN and ERC are now solidifying a partnership that allows the sharing of information and resources. In the near future, the ERC aims to start up camps in collaboration with various ecovillages. A first example is Camp Sandele, a new potential camp at Sandele foundation in The Gambia.

What is an Ecovillage?

Ecovillages are regenerative human settlements that aim to redesign ecological, social and economic systems. These can be both new intentional communities, or traditional ones. Ecovillages, just like ecological restoration sites, are consciously designed with the help of holistic design processes such as permaculture, or regenerative design. The processes of an ecovillage are locally owned, and ideally involve participation of the entire community. The recently launched documentary Communities of Hope featuring ecovillages in Europe, gives an inspiring impression on what is possible.

“An ecovillage is an intentional or traditional community that is consciously designed through locally owned, participatory processes to regenerate their social and natural environments.”

A Surge of Interest in Ecovillages

The word ‘ecovillage’ originates from a 1991 study of sustainable communities commissioned by the Gaia Trust. The interest in these types of communities was clearly on the rise. This led to a successful first international meeting of sustainable communities at the Findhorn Foundation in Scotland in 1995. As a result of this meeting the Global Ecovillage Network was launched, and has grown ever since. Today, 25 years later, there are thousands of ecovillages in 114 countries around the world, and GEN is represented in regional networks on every continent.

In addition, anyone can learn about designing regenerative communities and their four dimensions – ecology, social, economy and culture – in the Ecovillage Design Education Curriculum (EDE).

The EDE is a transformative 4-week program offered by ecovillages in 54 countries. You can also learn about the four dimensions on the Gaia Education e-learning platform, which we also partnered with for the Ecological Restoration Design online course launched this year.

In the ecological dimension, ecovillages aim to restore local water cycles and aim for sustainable water management, such as through rainwater harvesting, compost toilets, and biological wastewater treatment. They work on sustainable local food systems and often grow at least a part of their food on their own land using permaculture design, organic or biodynamic farming. In terms of energy, ecovillages usually adopt sustainable energy systems, ranging from wind power to solar power, renewable biomass, hydroelectric, or geothermal energy systems. And lastly, ecovillages aim at using green building techniques, focused on high energy efficiency, green roofs, and the use of local and natural materials. An impact assessment by the Global Ecovillage Network in 2017 found that of 30 ecovillages, 90% work actively to sequester carbon in soil or biomass, 97% restore or replenish water in their ecosystems, and 85% compost all their food waste. On top of that, ecovillages have some of the lowest carbon footprints in the industrial world. More or less all ecovillages are working to restore damaged or degraded ecosystems.

Four ecovillages around the world

Findhorn Community is one of the longest running ecovillages, founded in the early 60s. It has over 400 community members, and in addition they receive guests for almost 200 week-long courses every year. Findhorn Community consists of a large variety of eco-houses, and four wind turbines supply 100% of the energy needs. Organic and biodynamic farming provides for the communal kitchen and over 100 households, and there is a biological sewage treatment plant. Residents of the Findhorn Community have the lowest ecological footprint of any community measured so far in the industrialised world, and it has received the United Nations (UN)-HABITAT Best Practice Award.

Sekem is a sustainable community, founded in the desert north of Cairo in 1977, a manifestation of a vision of Ibrahim Abouleish. The community not only has a biodynamic farm, but also a kindergarten, a school, university, and medical center. Biodynamic agriculture converted 2,800 hectares of desert to farmland. To establish sustainable water management, five wells of about 100 meters deep were dug, complemented by a huge underground irrigation system. Organic seeds and seedlings are produced on-site. Today 850 farmers from all over Egypt are members of the “Egyptian Biodynamic Association” founded by Sekem. The project has won numerous prices, such as the Alternative Nobel Prize in 2003 and the Business for Peace Award in 2012.

Sekem Wahat was established 10 years ago, as part of the original Sekem community. Camp Sekem Wahat is now member of Ecosystem Restoration Camps, and you can volunteer to support and learn how to restore desert soil and create functional land.

The lessons learnt by many thousands of ecovillages around the world are crucial, and provide us with hope in times of crisis. Lessons in both ecological and social restoration, that can be applied in urban settings as much as in rural ones. Bringing together the movements of ecosystem restoration and regenerative communities in the form of ecovillages, can multiply our potential for transformation. 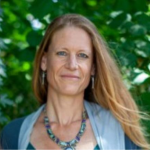 Ethnobotanist, writer and designer. In 2013 she left her full-time job in London to pursue the question; how can we live in harmony with nature? Since then she traveled and volunteered in about 20 projects, from ecovillages to permaculture projects, in Europe and South America. Read more articles on her website.